The Cry stars Jenna Coleman as new mother Joanna, who steps out into a media frenzy in the show’s opening scene. The question of why remains a mystery as the story gradually unfolds through its four episode arc. The first episode weaves through a whirl of multiple timelines, which is often jarring due to its lack of chronology, but is a clever narrative device used to gain a wider insight into the development of the relationship between Joanna and her partner Alistair.

As the story unfolds through each episode, the circumstances surrounding Joanna are gradually revealed with more questions being raised as to what led to these events. Twists and turns are played out to shocking degrees, often with excruciating cliffhangers. With Joanna herself alluding to two sides of her personality in the opening episode, the viewer is kept guessing as to Joanna’s motives and all is not as it seems…

The Cry concluded on Sunday night in a gripping fashion and was full of shocks as the truth behind the story’s events were revealed. The show delivered a fantastic performance from Jenna Coleman, who initially had reservations about the role due to not being a mother herself. However she proved to be the perfect person for the part, displaying a fragile vulnerability as well as a mix of coldness, a sense of detachment from her surroundings and a complex range of emotions. The show must be praised for highlighting the difficulties and pressures of being a new mother and the scrutiny and judgement that they can face, painfully portrayed in a relatable airplane scene that everyone will have experienced to some degree, regardless of being a parent. The show also highlighted the intrusive nature of the press and the impact of media scrutiny and the online world on people’s lives and how destructive those outlets can be, at a time when excessive information can lead to a lack of impartiality. 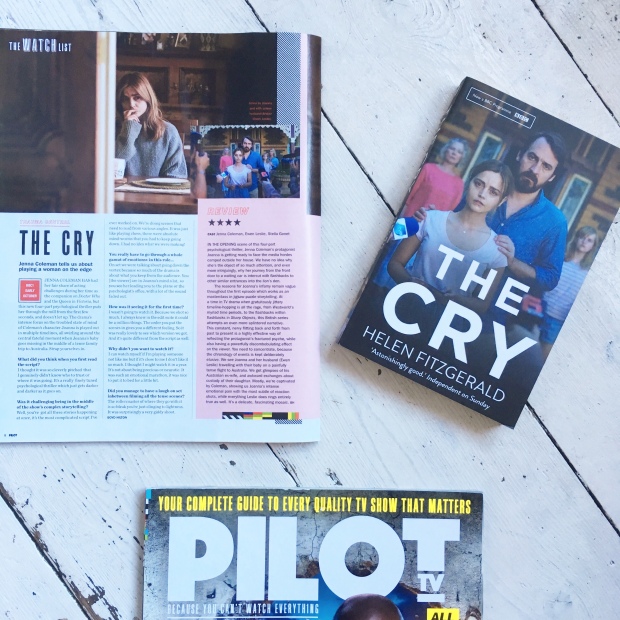 The Cry is based on the novel by Helen Fitzgerald, which was longlisted for the Theakstons Old Peculier Crime Novel of the Year Award. The book has now shot up the book charts as a result of the success of the show. While The Cry had the difficult task of replacing the phenomenally successful Bodyguard in the prime time Sunday night slot on BBC One, it proved to be another must see drama that gripped viewers in the U.K. yet again!

Did you watch The Cry? Did you guess all the twists and turns? Have you read the original novel?